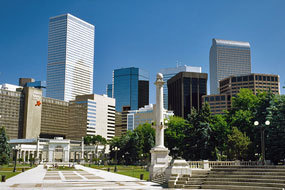 Colorado and its capital have so much to offer new and potential residents. With the famously sunny skies, emphasis on healthy and fun lifestyles, and abundant scenery, it’s no wonder visitors find themselves scheduling in open houses and home showings once they arrive.

But the effects of the recent economic downturn linger on, and wary buyers have been cautious about making new purchases. Is an investment in a home and a new life worthwhile, they wonder? If the market takes another turn for the worse, will a new home in Denver pay out down the road?

Why Denver is a Great Place to Look for a Home

While lives and families nationwide were affected by the economic recession in 2008, some areas were hit harder than others. The Denver area, particularly the capital city itself, weathered the recession better than most others. With steady growth from the 1950s onward and the state’s enticement of burgeoning industries such as green energy, a fresh supply of jobs helped cushion the effects for Denver residents.

This is not to say that Denver was completely unaffected. Like homeowners in most urban centers, Denver homesellers looking to make a move or profit from the sale of their residence struggled with comparatively low sale prices, long times on the market, and an increased number of short sales and foreclosures in their neighborhoods.

But even in the darkest depths of 2009, sales reports were not nearly so bleak for Denverites as they were for the hard-hit communities of Orange County, Las Vegas, Phoenix, or even nearby cities in the Midwest. Homes sold at a steady rate, and incentives by the governor’s office to woo new businesses into the area helped bring an influx of new workers, many of whom felt it worth their time and money to purchase a new home.

The Future for Denver’s Real Estate is Bright

Colorado’s economy continues to thrive, particularly in the aptly named Central Business District and Denver Tech Center. And a general upturn in markets overall are reassuring for prospective buyers and current homeowners wanting to see value in their homes.

Denver is definitely seeing payoffs from both factors. Median home price sales are nearly double what they were two years ago, and properties spend less time on the market. Eager investors looking to swoop in on a short sale or foreclosure property will also find themselves disappointed; even though Denver was never as ripe for such buys as its urban compatriots, distressed home sales have dipped to a tiny sliver of the city’s real estate market.

New and prospective owners, in other words, have reasons to get excited about buying a house, townhome, or condominium in Denver. The city’s steady growth is projected to continue, making future sales a plentiful return on a current investment, and with as many amenities as Denver has to offer in its jobs, friendly citizens, and natural beauty, it’s no wonder such predictions flourish.

With the real estate shooting past classification as “recovered” to “booming,” there is no time like the present to find your Denver home. Start browsing in the Mile High City today!