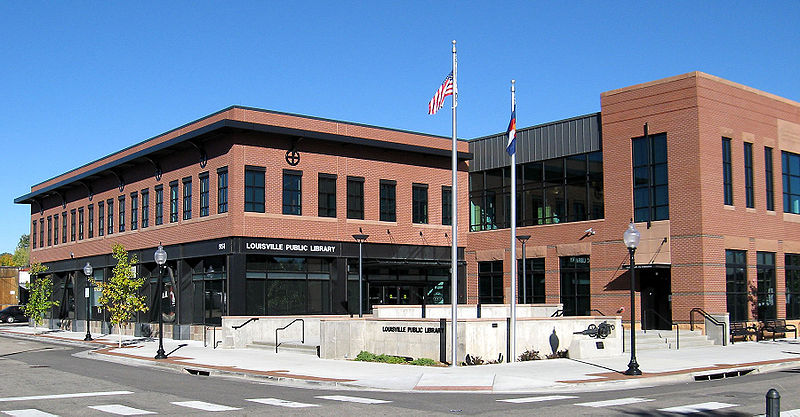 The city of Louisville, Colorado, is situated in Boulder County, about six miles east of the city of Boulder and twenty-five miles northwest of Denver, the state’s capitol city. Just about 19,000 folks call Louisville home, but many more visit throughout the year to taste the city’s great selection of restaurants, explore the city’s many museums and parks, and simply take in the relaxing ambience and old town vibe of one of Colorado’s most restful and beautiful towns.

Overview of City of Louisville, Colorado

First thing is first: it’s called “lewis-ville“, not “louie-ville.” This is a city that has a personality and charm all its own, and there’s no need to unnecessarily confuse it with the town of the same name, but different pronunciation, in that Bluegrass State, Kentucky.

The city of Louisville, Colorado was incorporated in 1882, but people had been there well before then. The town–and the region of the state in which the town resides–was a big coal mining hub, with the Welch Mine opening in 1877, and many more to come after that.

Today, the city has left its mining roots behind–except for the fascinating monuments and museums still in existence–and focused on creating a lasting wellness within the city in the forms of culture, arts, education, green living, and an overall sense of community pride. CNN and “Money Magazine” have both ranked Louisville, Colorado among its top 100 places to live in the United States–and almost exclusively in the top 5. In July of 2009 and 2011, they went so far as to give Louisville the number 1 spot, naming it the overall best place to live in the entire country.

What makes it the best place to live? Well…

In short, it was named the best place to live in the United States because, quite simply, it is the best.

For those who are thinking about packing up and heading out to the city of Louisville, Colorado, but aren’t sure if there’s enough culture or entertainment to keep them satisfied…don’t fret.

For visitors, newcomers, or even local folks who don’t get out very often, here’s a look at Louisville’s best attractions and cultural highlights.

Featuring 100-year old buildings, and over 100 businesses, historic downtown Louisville is an absolute must-see. First developed during the mining years, downtown has been preserved as well as possible through the following century, leaving you a variety of restaurants, retail shops, museums, and other establishments that will transport you back in time and give you great stories to tell your friends and family.

Aside from the proximity to Denver’s cultural diversity and culinary delights, Louisville has its own laudable merits in the department of arts and entertainment. The Louisville Center for the Arts is famous for its lectures, exhibits, performances, and presentations and the Colony Square theater offers all the latest Hollywood blockbusters.For breakfast, lunch, or dinner, Louisville a fantastic array of restaurants to choose from. Everything from afternoon fondue at the Melting Pot to an evening pitcher of domestic brew at the Lucky Pie can be found in beautiful Louisville.

Finally, you can’t forget Louisville’s art and theater scene! From the Bittersweet Gallery to the Coal Creek Community Theater, Louisville, Colorado has something for everyone.

You’ve seen the movies, the performances, the museums, and you’ve had your fill of pubs and melting pots. What next? Well, Louisville offers an amazingly versatile array of other activities that you can while away your afternoons or weekend participating in.

There is a recently renovated indoor rec center for swimming, racquet ball, hand ball, and the like (Louisville Recreation & Senior Center); there’s rock climbing, trail hiking, and mountain biking to be done in the Rocky Mountains (about an hour from downtown Louisville); and you can even bundle up with your skis and poles and get up to Winter Park, Breckenridge, or Copper Mountain for some winter sporting (less than a 2 hour drive).

Also make sure to see what Louisville is like from a mom’s perspective. See my wife’s take in Louisville here.

For more information about the city of Louisville, Colorado, county of Boulder schools, or other real estate market updates in the area, contact Brian today.

Brian MacMillan is a Boulder & Denver Real Estate Agent helping families find the perfect house in the Front Range for their needs. With expertise on the Cherry Creek Real Estate Market all the way to Boulder Colorado Real Estate, Brian can help your family find exactly what it needs.